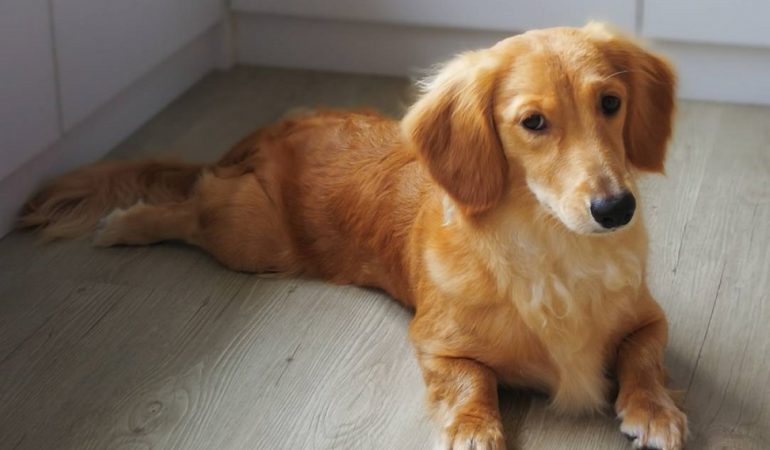 Beautiful fluffy fur, short stubby legs, what may be mistaken as a walking sausage is actually an adorable dog. If you are still wondering what kind of dog we are talking about, then say hello to the Golden Dox. A fearsome and feisty four-legged dog, guaranteed to bring a wide smile to your face.

If you are about to get a Golden Dox puppy and looking for a comprehensive guide on the breed, this article is a complete resource guide for you. You’ll find all the important facts about the Golden Dox dog including pros and cons, grooming requirements, temperament, and health.

Introduction and History of Golden Dox

Ever wonder where the Golden Dox gets its notoriously good looks from? The answer lies in its unique lineage. The Golden Dox Dog is a cross between the beautiful Golden Retriever and the Dachshund. Which explains both the Golden Dox’s cute sausage-shaped body and glorious, wavy fur.

The Golden Dox dogs first appeared in the scene during the 1980s when breeders were trying to cross different dog breeds to produce healthier puppies. Coming from two of the most beloved dog breeds, the Golden Dox was all set for stardom but it became popular just recently when designer breeds started to grab the attention of dog lovers.

While the American Kennel Club does not officially recognize the Golden Dox breed due to the fact that it is a hybrid dog, it remains a much loved and popular pet around the world.

What’s Good and What’s Bad About the Golden Dox?

Every breed has certain features that may or may not be compatible with someone so it’s recommended to learn about the breed’s pros and cons before you get a puppy.

Pros of having a Golden Dox

Friendly: They are known for their friendly behavior with their owners and strangers too. They love to spend time with their humans, especially kids.

Ideal lapdog: Due to its small size and cuddly nature, it can easily become an ideal lapdog and would spend hours in your lap.

Adaptability: The Golden Dox can easily adapt to different types of households- small or large.

Cons of having a Golden Dox

Separation Anxiety: Due to their strong bond with their humans, they are prone to separation anxiety and cannot be left alone for a long time, it can be taken care of with early training though.

Easily distractable: Even a small housefly can distract your fur baby easily and all of sudden it would not remember what it was doing. This behavior may not be helpful during the training sessions.

Like any mixed breed, it is impossible to predict what the Golden Dox would look like. However, certain distinct features may be helpful for telling it apart from other dogs.

The Golden Dox or as it is fondly called Golden Weenie is a family-friendly dog. This dog’s playful and endearing nature makes it excellent company for adults and children. It is even affable towards other dogs. However, cats and rabbits are known to bring out the hunter in this pup, especially in the absence of proper early socialization. Like all dogs, the Dox loves to cuddle with humans and enjoys being the center of attention. But be mindful, because the Golden Weenie is a very intelligent dog that can get easily bored. Therefore, pet owners need to keep them engaged and busy in different activities.

The Golden Dox dogs are known for their gentleness and happy-to-go attitude which is why they don’t make very good watchdogs. If threatened and suspicious, the Golden Dox will bark to alert its owner but will not go as far as to be aggressive.

While the furry fellow may be a little shy at first, it is known to live for companionship. As a result, the Golden Dox suffers from separation anxiety when left alone for too long.

It is in this pup’s nature to obediently follow commands and please its owners. Therefore, good training and early socialization can make it the ideal house pet.

Patience is a virtue and much needed one too when you are training your Golden Dox. While these dogs are known for their obedience, they can also be very headstrong and stubborn at times. This is why owners are advised to begin the training process when their puppy is as old as 8 weeks.

First, the Golden Dox needs to be socialized by hanging around new people, places, and situations to build confidence and rapport. Next, the Dox should be taught tricks and should be rewarded on basis of good behavior for encouragement. They shouldn’t be scolded if they don’t do well in the training sessions.

Similarly, Dog owners need to be mindful of the Golden Dox’s exercise needs. While it may be a small dog, the Dox is full of energy and needs interactive playtime to burn some of this energy.

Activities such as catch and fetch, swimming, and daily walks can help these pups in staying healthy and upbeat. Furthermore, a trip to the park where the Dox can play with other dogs can also be stimulating for its physical and mental well-being.

The Golden Dox is a moderate shedder so you won’t have to worry about dog hair all over your house. But make sure to check your dog’s fur for signs of moulting in the summer months. Brushing your dog twice a week would be enough while grooming from a professional groomer is also recommended every 2-3 months.

The most important thing dog owners need to look out for is the Golden Dox’s ear health. As with any breed with furry, droopy ears, the Dox is prone to ear infections. So, remember to clean your pups’ ears with a damp cloth once in two weeks and make sure there is no foreign object in the ears.

As for oral health, remember to brush your dog’s teeth twice a week so that he can continue to smile brightly and spread joy. Also, trim the nails carefully when they are too big to harm your dog or anyone else.

While a dog’s diet varies with age, size, and activity levels, the Golden Dox can be kept on either high-quality dog food or a BARF diet. About 2 cups of dog food a day are sufficient for the average Golden Dox but a rawer diet of vegetables, meats, and fruits may also be desirable for some dogs.

Ultimately, it is best to consult your vet or dietician when designing a feeding schedule for your dogs.

While it may be true that mixed-breed dogs are much healthier than their purebred counterparts, no dog is without health risks. The Golden Dox can suffer from a variety of health complications such as Epilepsy- a neurological condition that causes seizures but can be managed with proper medication.

Similarly, Cushing’s Disease is another prevalent condition amongst dogs that results in loss of fur, signs of a potbelly, and excessive hunger.

Other possible health issues you may witness in your Golden Wiener are heart diseases, joint issues, skin allergies, and intervertebral disc disease.

However, frequent vet checkups, adequate care, and a whole lot of love are usually enough to ensure the wellbeing of dogs. Also, if you get a puppy from a reputable and responsible breeder, the chances of inheritance diseases are almost zero. So, always get a puppy (any breed) from a well-reputed breeder.

Dogs are wholesome, loveable creatures and the Golden Dox dog is no exception. As always, we recommend adopting a puppy from your nearest shelter before approaching a breeder. But whatever you may decide to do remember that dogs like any other pets are a huge responsibility. So, don’t forget to smother your pups with affection and take good care of them.