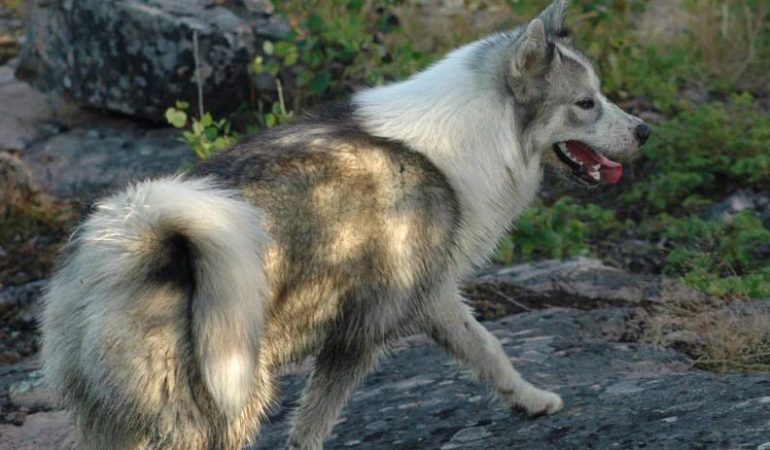 So, today we are going to feature a sled dog on our blog for the first time. Wondering what is a sled dog? The sled dogs are those that have been used for transportation purposes for around 9000 years. And one of these sled dogs is the Canadian Eskimo Dog.

The Canadian Eskimo Dog is also known as the Canadian Husky, Qimmiq, Qimmit, Kingmik, and Exquimaux Husky is an incredibly rare breed of Arctic dogs. You can easily mistake them for your usual huskies, owing to facial resemblance. However, they are significantly different from your average dog breed.

Apart from the fact that they are among the most beautiful breeds, the Canadian Eskimo Dogs cannot become an ideal pet because of their energy and the hunting features. Still, if you want to raise them as a pet, you must train and socialize them well.

Now, let’s have a quick look on this wonderful breed.

These furry creatures have wedged-shaped heads with rather pricked, triangular ears. Their almond-shaped eyes vary in color, from a dark brown to an almost amber shade. Like other sled dogs, they are known for their extremely dense and thick coats, especially around the head. Also, they have soft undercoats but coarse guard hair that can be quite wooly.

The Canadian Eskimo Dogs are found in a number of exotic colors and dual shades including red and white, brown and white, grey and white or simply pure white. They may also have black spots and markings that only adds to their infinite cuteness. Their tails are short and curved that can be seen going rapidly back and forth when they are excited.

The males tend to be taller, about 37 inches while the females only grow up to 24 inches. There are also differences across average weight between the male and female with males generally weighing slightly more. These sporty creatures reach full size within a year however it takes them three years to reach full maturity.

Canadian Eskimo Dog as a Pet:

They make excellent house pets since they only moderately bark and that too is not too loud nor unpleasant. So they won’t keep you up all night. However, they do occasionally howl but they are very gentle and affectionate around humans so it’s easily forgivable.

By nature, they are very pack orientated so expect them to be hostile and aggressive around other dogs but around humans, they will be nothing but loveable and excellent sports, especially if you like backpacking activities. Since these dogs are beyond fond of the outdoors.

The Eskimos are intelligent, strong-willed dogs that are always up for a challenge. They are competitive creatures that are known to not give up and have excellent energy. They are also very independent too and while they don’t make good guard dogs they are very fun to play with.

Canadian Eskimo Dogs with other Pets:

Don’t be deceived by how adorable they are as they can be quite destructive too. Among many things, they enjoy chewing and digging holes just about everywhere so get ready for a spoiled and messed backyard if you have planned to get this furbaby. Also, they don’t do well around cats and will see them as potential prey, so maybe don’t keep a cat around to be safe.

Eskimos require high-protein dog food and meat. They have trouble digesting most grains with the exception of corn and rice.

They shed twice a year and need almost no grooming at all. They typically enjoy at least 40 minutes of exercise each day. Less than that or no exercise may result in a spoiled dog with aggressive and destructive behavior.

On Verge of Extinction:

In the last century, Eskimos went almost extinct and are still one of the rarest dog breeds which is why they can be expensive in the pocket but these gorgeous dogs are worth it. Unfortunately, they are once again threatened with extinction as there were only 300 or less purebred Canadian Eskimo Dogs in 2008.

If you are a first-time owner or an inexperienced one, the Canadian Eskimo Dog is not for you. But if you think you can train and socialize this breed easily and can give enough time exercising it, get one.