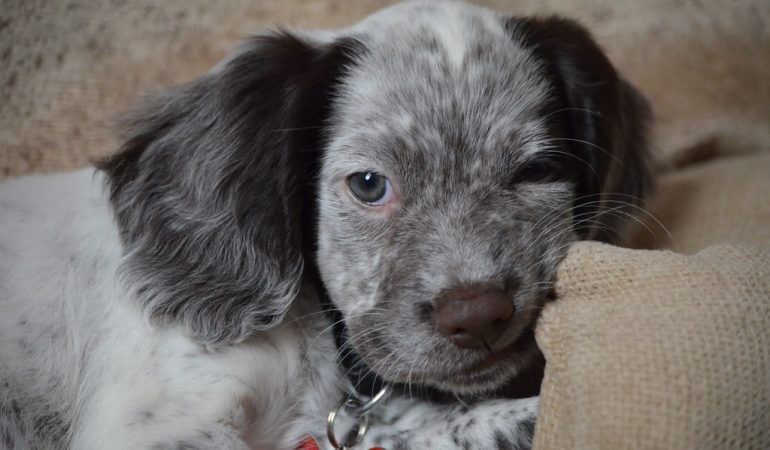 Just imagine you have combined the feistiness of the American Cocker Spaniel and the wit of the English Springer Spaniel? What will you get? Well, you get the surprising Sprocker Spaniel. Sprocker Spaniel is a new hybrid dog breed famous for not just its furry cuteness but its intelligent personality and adaptable nature.

Apart from the fact that it is a relatively new dog breed, it has become popular very quickly. The team of our experts logged in to several forums and sites to collect the facts and figures about the breed. This article contains accurate and authentic information about the Sprocker Spaniel such as health-related issues, features, temperament, grooming needs, training, etc.

If you would like to know more about this small-sized cute companion dog, keep on reading for a comprehensive guide on the Sprocker Spaniel.

History and Origin of the Sprocker Spaniel

The Sproker Spaniel takes up after the best traits of both its parents but it is far from your average designer dog. In fact, these pups are still bred as working dogs because of their reliable nature and resilient personalities.

The Spaniels are said to be originated in France and they were first mentioned in the 14th century by Gaston III, the eleventh count of Foix. While this mixture- the Sprocker Spaniel originated somewhere in America a little over 20 years ago.

However, dog enthusiasts strongly believe that the Sprocker Spaniels first came into existence in the 1700s as a result of un-intentional mating between its parent breeds. This is where they say the idea for the modern Sprocker Spaniel also came from.

Since both the American and English Spaniels were hunting dogs it is no wonder that their offsprings are athletic, nimble, and handsome dogs.

Today’s Sprocker Spaniel was only bred intentionally two decades ago but the breed remains quite popular and loved amongst dog owners.

Related: How big is a fully grown Golden Mountain Doodle?

What are the common features of a Sprocker Spaniel?

They said, mix two great things and you will only get something even greater, and rightly said indeed. The same can be said for the Sprocker Spaniel that takes up closely after its parent breeds in terms of appearance.

So, the following are some of the common features of a Sprocker Spaniel.

Like all Spaniels, the Sprockers are loyal dogs, deeply devoted to their human. By nature, they are quite athletic and therefore outgoing and social creatures that love to play around.

Around their human, they are known to be silly and goofy but leave them alone for one minute and they will waste no time in conjuring up something mischievous.

They enjoy human company and are very affectionate creatures that get along well with children as well. This is why if they are left on their own for too long, they can become sad and cranky and develop separation anxiety. But you can get rid of this behavior with consistent training in their puppyhood.

The Sprocker Spaniel is a beautiful and elegant creature which means it requires special grooming attention to maintain its notoriously good looks.

To keep their fur from tangling and forming annoying knots, dog owners are required to brush their pup’s hair at least once daily. First, by using a pin brush and then a comb to detangle any knots of hair in the coat, especially around the belly area.

Bathing them once a month would be enough but if they have a light-colored coat, you may need to bathe them when it looks dirty.

For dental hygiene, their teeth must be brushed at least two to three times a week to prevent bad breath and tooth decay. Remember, bad oral health may result in some serious issues such as loss of teeth, infections, and other systemic issues.

Since these dogs have long floppy ears, dog owners should clean them once a week with a damp towel to avoid infections. Also, make sure that no foreign object or wax is not built up in your pup’s ear or it may turn into an infection.

Last but not the least, nails! The Sprocker has strong, sharp nails that grow back quite quickly. This is why their nails must be frequently trimmed. This ensures that the dog doesn’t hurt himself or others around him while he plays around.

These pups are like exploding fur balls of cuteness and energy. They like being kept busy and do very well at physical activities. It would not be wrong to call them the dogs equivalent of gym buddies.

The Sprocker Spaniel requires up to two hours of intense work out including serval walks, playtime, and different activities every day to remain healthy and happy. While this may seem like too much for the average dog owner, they are no less than a dream dog for fitness enthusiasts. And yes, they are not an ideal breed for a person with a busy schedule who can’t manage to exercise his dog. Also, if you are getting a dog for the first time, consider getting some other dog.

Additionally, like all dogs, they need early socialization and positive reinforcement to instill good behavior and make them friendly and well-mannered pups.

Living with a Sprocker Spaniel

Unlike most dogs, The Sprocker Spaniels are well-behaved pups that rarely bark or howl. They even get along with other animals and are the perfect cuddle buddies.

It should be noted, however, that they have problems adjusting to apartments as they are high-energy dogs that love to run outside and inside the house. A house with a lawn or a backyard is preferred for them where they could burn their excess energy.

They are not particularly good guard dogs as they are too friendly and tend to refrain from attacking even when they feel threatened.

While the Sprocker Spaniel is healthier than most dog breeds, several notable health concerns are surrounding them. They have a higher risk of developing hip dysplasia, a common genetic condition in large-sized dogs where the femur and the hip joint don’t fit.

Also, they are prone to Hypothyroidism which can cause their face to swell up from time to time. This is why dog owners should frequently take their pups to the vet for a full checkup.

All dogs make brilliant pets and the Sprocker Spaniel dog is no exception. However, they are less than ideal pets for first-time dog owners as they have extensive grooming and training needs. But if you are up for the challenge then we guarantee you won’t be disappointed because these dogs give back so much more in form of love.

Recommended read:
All about the Havanese Dog