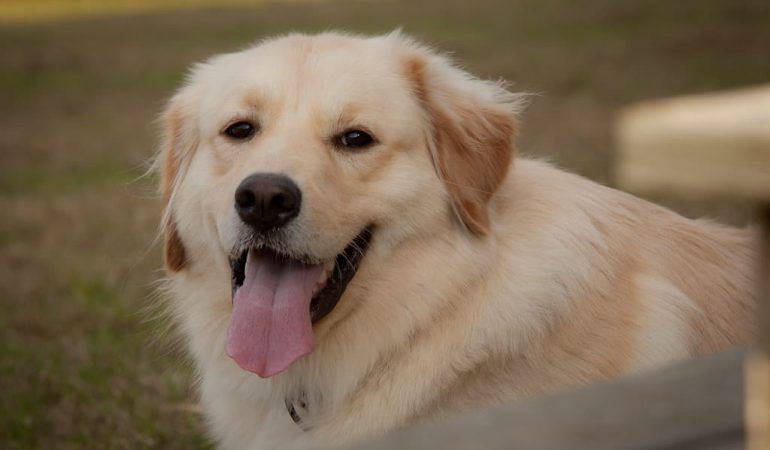 Golden Pyrenees is a giant, loving and affectionate dog, as well as, caring and lovable. To enter the market, the Golden Pyrenees dog is one of the most majestic dogs.

If you plan to get this wonderful Golden mix and look for a complete guide, you are in the right place. This post will get to know everything about the Golden Pyrenees dog breed, including appearance, temperament, grooming, training, health, and much more.

Let’s find out more about Golden Pyrenees below but first, have a look at the breed profile.

While we talk about its traits, we need to have a closer look at the parent breeds. For example, the Great Pyrenees is used as a livestock watchdog and is popular for its ability to bark loudly. On the other hand, the Golden Retrievers are well known to be ideal family pets that were originally bred to retrieve the game. Later they gained popularity as detection working dogs, tracking dogs, and obedience competitors.

Let’s have a quick introduction to the parent breeds.

The Golden Retriever is a Scottish dog breed that is popular for its hunting and retrieving abilities. Lately, they have been used as disability assistance dogs, as well as, search and rescue dogs.

These dogs were said to be used by shepherds for protection against bears and wolves. The Great Pyrenees became so popular in the seventeenth century that the King Louis XIV of France named it the royal dog of France.

It was imported to the US and Canada in the 1930s and as per AKC, currently, it is the 66th most popular dog breed in the US. Some other popular Pyrenees crosses are the Great Bernese (cross with the Bernese Mountain dog), Pyrador (cross with Labrador), and Saint Pyrenees (cross with Saint Bernard).

Golden Pyrenees has a well-proportioned body that is slightly longer than its height. They have a very thick wool-like coat that requires daily brushing.

The Great Pyrenees have almond-shaped brown eyes that make them catchy dogs while its upper lip slightly droops over the lower one.

They have a deep chest with long straight forelegs and a fantastic fluffy tail. The head is rounded with floppy ears while the nose is a rich black with wide nostrils. Eyes are deep, expressive, and alert. They have long and robust limbs with well-developed thigh muscles.

Their coat is one of the most appealing physical qualities of the Golden Pyrenees which may be golden with darker brown and black patches of fur.

Temperament and Behavior of Golden Pyrenees

Both the parent breeds, Golden Retriever and the Great Pyrenees have quite different personalities. So it can be tricky to predict the temperament of the Golden Pyrenees. It will more likely to inherit the gentleness of Golden Retrievers. Along with that, a Golden Pyrenees should be energetic and playful and will never say no to a game or other activities.

With their immediate family, Golden Pyrenees are very gentle and friendly. They may not be much social and may take time to be warmer to the people outside of their circle. They have puppy-like enthusiasm even when they are mature like the Great Pyrenees.

Is Golden Pyrenees suitable for families?

Golden Pyrenees is a big dog that requires an owner with great strength. It is a calm dog, but may not be safe for families with young children or infants due to its big size.

Training is necessary if this dog is to adapt to a family because of its large size as it can be unruly without training. Training should start at an early age and it should be consistent so that your fur baby feels more comfortable with its place in the home. One important thing to remember here is that training a Golden Pyrenees dog may not be an easy job if you are not experienced.

Techniques to train this pooch should be a positive reinforcement method so that it enjoys its training. Punishment-based strategies are never suggested. Also, it is recommended to socialize them with other dogs as early as possible as it will help to solve the issue of dominance between dogs.

The Golden Pyrenees’ coat is very thick and long. Although it is fluffy and feels lovely to touch, it requires extra grooming. Along with daily brushing, it does require additional maintenance to keep it from matting and tangling.

They need to be bathed once a month or every two months. However, their teeth should be brushed at least twice a week while their nails should be trimmed every 2-3 weeks.

They need four to five cups of food daily. They have a giant appetite and Kibble is best for them. It is best to consult a veterinarian before you alter the diet of your Golden Pyrenees.

Daily exercise is necessary for any large-sized dog and the Golden Pyrenees fulfill these criteria. It will help in maintaining weight. Exercise in a dog park is helpful to socialize with other dogs and people. Some of the most popular and easier exercises include chasing after a ball and tug of war.

Remember one thing, because of their thick coat, the Golden Pyrenees cannot bear the heat, therefore, exercise should be done during the coolest part of the day. Overall, up to 2 hours of mixed activities are recommended for this breed.

The Dog Registry of America

The puppies of Golden Pyrenees proliferate as compared to other dogs. They grow almost 18 inches at three months of age which is incredible. Despite the fact that they are big in size, they are very gentle and playful but not safe with young children. In a single litter, the Golden Pyrenees may have 7 to 12 puppies.

The signs and symptoms of hip dysplasia display from six months of age. In this condition, the dog hesitates to jump, bunny hop when running, and sits with their knees to the side. Unfortunately, this condition runs in generations so it is recommended to ask for the dog’s hip score while getting a puppy from a breeder.

It is a devastating condition that can appear suddenly and may kill your dog if left untreated.  The cause of the bloat is still unknown. It is more likely to occur in dogs with a deep chest. Symptoms are panting, retching, and bloated abdomen. If untreated, the animal can pass away within hours.  According to a study, 30% of the dogs who developed this disease died.

It is a malignant cancer of bones. It generally affects the arms and legs and causes severe pain. Cancer can spread quickly around the body. It can be confused with lameness and limb swelling from an injury.

The lifespan of the Golden Pyrenees can be 10 to 13 years. BTW, it is a relatively new crossbreed and it is not easy to predict its lifespan, as well as, other traits and aspects. So, we can say that this lifespan is concluded from the data currently available and may vary.

All about Newfypoo dog
Utonagan Dog Breed Info
All about Bernedoodle