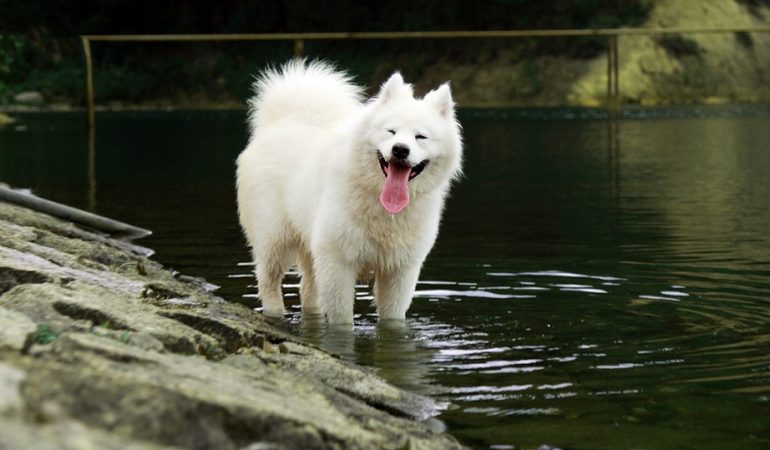 Today, we will be featuring yet another sled dog, known as the Samoyed Dog. Now I am sure you are just as curious as we are about where this herding dog gets his unusual name from. As it turns out this particular breed is actually named after, an indigenous group of Serbian people known as the Samoyedic; known for their tough nomadic lifestyle.

The Samoyed is a breed of large herding dogs also known as the Bjelkier. They are related to the Laika and spitz-type breed they share a little physical resemblance with their biological cousins.

The Samoyed is easily the cutest and most elegant creature you will ever see, and while they are generally hard to domesticate, I am sure you dog enthusiasts out there will find it hard to resist trying once you read this article.

Now, let us look more closely at this exquisite creature.

The Samoyeds are covered in a beautiful fluffy white coat like snow, with just a slight hint of silver lining. They have triangular, erect ears, covered heavily in fur while their eyes are shaped like almonds and are usually brown or black but sometimes even blue. Now, one of the most distinguishing features of the Samoyed dogs is their rather peculiar-looking tail, curled over the back such as it actually touches their back and falls when they are relaxed and calm.

Do you know how sometimes you get the feeling that your dog is smiling at you? Well, the Someyed actually does. So much so, that these furballs are fondly nicknamed smiley or Sammy. This is due to their upward-turned mouths that give them a characteristic grin that literally no one can resist falling in love with.

The Samoyeds can easily weigh up to 50 to 60 pounds and grow as tall as 23.5 inches in the case of males and about 21 inches, in the case of females.

The Samoyeds are spectacular and grand dogs, not very well suited to the life of an apartment or condo. They are meant to be kept in a home with a large, securely fenced yard so they have room to romp and play. They require a lot of attention too, so be prepared to frequently have them groomed. However, they are such delightfully sweet and mischievous dogs that you are bound to enjoy as pets. If they get bored though, they will chew away anything in their paths as they bark for attention, so it’s best not to ignore them.

Like your average pet, the Someyed needs early socialization. Exposure to different people, sounds, environments helps them in adapting to life as a pet. They are naturally intelligent creatures that are extremely loyal to their owners. They are especially fond of children and are known to be very alert and amiable around them, to the point that they can even herd children.

Like most large breed dogs, a Sammy will grow really fast, which is why it is recommended that you feed him a low-calorie diet to slow down this process. Their diet should consist of a combination of vegetables and fruits with occasional freeze-dried meat.

The Samoyed isn’t as simple as most dogs, they are hunters by nature and require a lot of training to be domesticated in a proper way. They can also be somewhat hostile around other animals like cats, but overall they are very friendly and energetic creatures that will make your life a lot more vigorous. However, if you are a first-time dog owner, we suggest starting with a smaller and simpler dog breed.