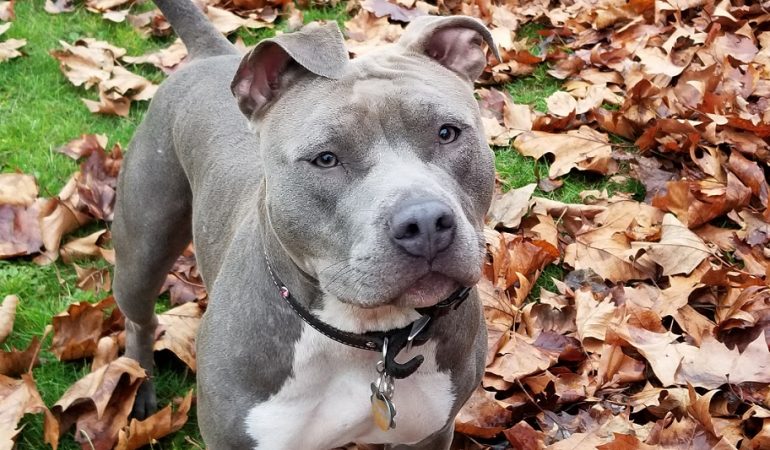 Have you ever wanted a companion who is strong and muscular, loving and loyal, and would never leave your side? Who am I kidding – of course, everyone wants someone like that to be around them all the time.

You don’t have to wait anymore because the Blue Nose Pitbull ticks off all the things on the perfect companion checklist!

Blue Nose Pitbulls are rare, just like all other extraordinary things in life. But beware, given the rarity of their kind, many people tend to make money out of breeding them illegally too.

Raise these Pitbulls with energy and love, and they will be your best friends forever!

In this article, we are gonna introduce the Blue Nose Pitbull along with its history and other important features. So, if you are looking to get a Blue Nose Pitbull, you are in the right place.

Let’s find out more about this adorable breed below.

Originally, Pitbulls were developed in England in the 19th century, when a bulldog and a terrier were crossbred. These Pitbulls had more muscular strength than their predecessors and were mainly used for hunting purposes. After a couple of years, they were banned from England and moved to America. There, they were used for protecting farms and as loving companions for the farm owners and tenants.

This Pitbull; Blue Nose Pitbull, gets its so-called name because of the presence of a recessive gene in its DNA, which causes the pigment eumelanin to give the Pitbull blue eyes, blue nose, and a greyish-blue coat. Any American Pitbull Terrier can have these features if both the parents of that Pitbull had the particular recessive gene that causes the blue pigmentation (which is not blue, but more of a greyish undertone).

Many breeders are now trying to breed Blue Nose Pitbulls together to create more pure breeds of this kind of Pitbull, but this can lead to serious health concerns since it’s a game of recessive genes.

People generally hold the misconception that the Blue Nose Pitbull has an aggressive attitude because people bred early Pitbulls for fights. This is false as the Pitbulls of today are incredibly loving, loyal, and caring. They have a lot of energy and love to play around – this involves jumping to ridiculous heights, so beware when they’re inside your house!

In addition to all this, since they are incredibly energetic and active animals, they are great partners for activities such as hiking, jogging, water sports, etc.

Because of their innate intelligence and activeness, they tend to get bored very quickly – they show this by chewing things – yup, you heard me right! So better keep chewable out of the way if there is a bored Blue Nosed Pitbull around!

However, Blue Nosed Pitbulls do not get along very well with other animals, especially those they are unfamiliar with. They are great with people, but not so much with their kind. The best part about them is their sensitivity – this makes them good listeners and understanding companions.

These sturdy animals require a wholesome protein and fat diet in their early days of growing up. Their daily calorie intake should be anywhere between 900 to 1800 calories, depending on their gender and age.

Exercise for these spirited animals is a must – around an hour a day should keep them happy and muscular, how they should be!

Training Blue Nose Pitbulls can get stressful at times due to their stubborn nature, but they are quick learners given their intelligence. They are smart when it comes to learning and understanding instructions, but if they’re not getting their way out of the training session, you’re in for a ride.

Given their coat has short hair, they hardly shed – at max, they’ll shed twice a year, but that too only very little, so they don’t require very regular brushing either.

With all this sensitivity comes a downside as well – they are prone to many skin problems. Although they are a healthy breed but belong to a relatively small gene pool, they are susceptible to genetic illnesses, mainly those of the skin. These diseases mainly include allergies, rash, skin infections, ichthyosis, and other skin conditions. Other health issues than the skin, may consist of immune system dysfunction, deafness, cataracts, heart disease, and alopecia. So, keep a close eye on these caring companions.

Oh, and remember – these dogs love digging around! So, if you want to get a Blue Nose Pitbull for yourself, make sure you have ample room in your backyard. This way your pup will dig all its energy whenever it is needed.

Another thing to be regular about with them is to continually check their eyes, ears, and teeth – make sure to brush their teeth daily, given the amount of chewing they do!

Despite their pleasant nature, many countries have banned the Blue Nose Pitbull. Likewise, the American Kennel Club doesn’t recognize this breed as a dog breed.

So, it was Blue Nose Pitbull, a muscular and strong but loving dog that loves to cuddle with its owners regardless of the image that has been created about them over decades.