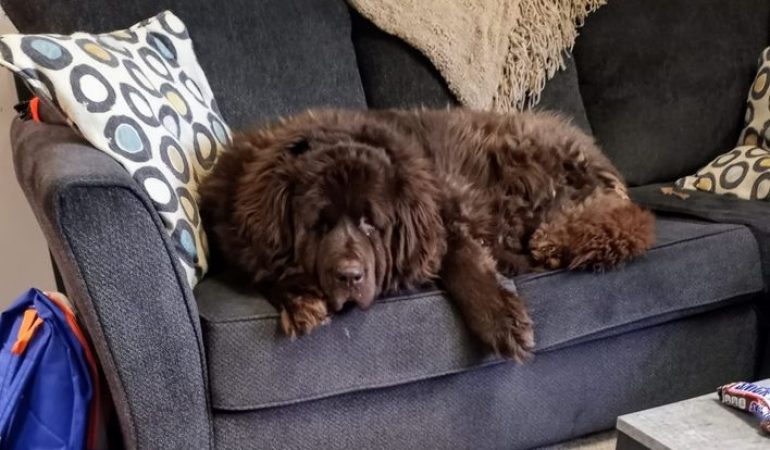 The Newfypoo has so much to offer since it’s a blend between the gentle giant; Newfoundland and the friendly Standard Poodle.

Gorgeous, polite, and easily understandable, the Newfypoo dogs give most households a pleasant addition. However, they need a lot of space and the owners should make sure that they are capable of providing them with no less than one hour of entertainment, exercises, walks, and other necessary activities every day.

If you are looking for a comprehensive guide about Newfypoo, we have got one for you here. In this post, we have added everything you need to know about this wonderful breed before getting a puppy. So, let’s explore more about Newfypoo.

History and introduction to Newfypoo

Also known as a Newfydoo, this breed has become very popular recently. While looking for its origin, we didn’t find any evidence regarding the place and time of its first-ever breeding but it is assumed that it was bred in the US within the last couple of decades.

It is mainly a large-sized dog having a stunning face with a dumb and hairy coat. They have huge heads and strong, muscular bodies with a tail which, in its latter part becomes quite wavy. The color of their eyes may be amber or a bit brownish and a sweet and trusting smile is often presented. Owners should prepare themselves for a puppy that doesn’t stop growing and has the ability to hit heights over 50cm!

Most of the Newfypoo dogs have that much height and weight that people can easily identify this giant in a pack of hundreds of dogs. They would usually be more compact and thin than the dumpy and bulky Newfoundland, taking over the Poodle’s more stylish silhouette. As far as the skull and muzzle are concerned, these are still broader than the typical dog but not so large as compared to Newfoundland’s.

Their bodies are a bit rectangular in shape. However, their limbs are stretched and in a straight line. Their tail reaches their hocks and sometimes twists at the tip. The Newfypoo weights anywhere from 30 to 70 kilograms when mature and reaches the heights of 50cm to 60cm.

They usually have a hypoallergenic coat, but it is never ensured, and they may shed small or large quantities of hair. Their coat is average-sized and mostly wavy, while their skin typically looks very hairy and thick. They come in several colors including black, brown, and grey.

The nature of a hybrid dog is not easily predictable as compared to a purebred dog, but many Newfypoos have quite similar personality traits. They are very friendly, even-tempered, and would be eager to be in the squad of just about everyone if they are well-socialized.

They usually welcome people of almost all ages; from kids to elders which makes them a good companion for aged people as well as the children. When they’re present, infants need constant supervision, simply because of their abrupt size and sheer strength. Secondly, if you already have a toy dog breed or other small pet in your home, you need to supervise them whenever they are together.

They show great obedience to their families and are intensely protective of them. While they seldom display aggression to an outsider or a house breaker, their sheer size and deep roar and bark are sufficient enough to scare away everyone! The Newfypoo is quite alert and very clever, loves being a part of family life, and loves the possibility of engaging in a move. When under-stimulated, they hate being put to their own devices for a very long time and may get bored.

The Newfypoo is quite fun to train with a flexible attitude. To learn a new trick, they figure it out quickly and require a bit of repetition. They respond better to positive support and are clearly motivated by food so rewards during the training sessions are highly recommended.

When owning a big and strong dog, a high standard of training is important. It is important to learn simple tasks, and reacting when called upon, from a young age. Similarly, it is important to socialize and teach dogs good behaviors from puppyhood. Consistency is crucial and during the training sessions of Newfypoos, the majority would succeed.

There are several diseases and conditions that the Newfypoo is vulnerable to, similar to any other dog, and that both breeders and prospective owners should be aware of.

If the long leg bone is unable to fit into the hip opening as it has to, Hip Dysplasia arises, and the joint grows abnormally. Undoubtedly, as they start growing older, the dog will be suffering from hip arthritis for sure. For many, the bigger the dog, the lesser the ability of them to deal with mobility problems, and treatment of hip dysplasia may prove to be disastrous. It is a very painful disease and must be treated right away.

An occurrence of bloat may happen unexpectedly and with little notice, a potentially destructive disorder that may kill your dog. In this disease, the belly of the dog has spread, and the dog is feeling difficulty settling itself. It is strongly recommended to bring your animal for diagnosis and treatment to the veterinary clinic as early as possible, so that the chances of its survival may increase.

Several heart problems are considered to be more common than few other breeds in the Newfypoo. To prevent these heart problems from being transferred to its future generations, the propagation or breeding of such animals should be examined. If any of the sires or dams found to have these diseases, the breeder should not breed them at all.

The Newfypoos are in no need of an enormous amount of exercise every day. Although large and not lazy at all, they are generally satisfied with just a single solid hour. They really like to wander around and catch balls and frisbees. They love swimming, and you’ll see them doing so with no concern at all for the outside temperature. Interestingly, they inherit their love for swimming from the Newfoundland dog that loves swimming in rough water.

When exercising these dogs, the owners need to be careful because over-exercising would lead them to joint problems in the latter part of their life. An exercise regimen should be addressed with their vet, depending upon their size and shape, to ensure that it will not be harmful to the developing bones.

You should comb or brush your Newfypoos dense fur regularly to avoid mats and tangles. If your dog has a low-shedding coat, you are more likely to groom it more often.

You should prepare your pup from a very young age to get used to the routine activities including claw clipping and teeth brushing. The reason is that training a mature dog for the very first time when it is more powerful than a calf isn’t easy at all!

Newfypoo is a lovely dog that needs to be handled with love and it is all yours. Despite its large size, it will be ready to spend its time in your lap. If you have enough space for a Newfypoo, you should get one for sure.

Which dog breed has bluish-black or purple tongue? 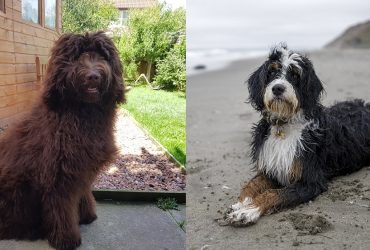 Bernedoodle and Newfypoo, both are the Poodle crosses and among the popular ones. Bernedoodle on …
More
Go to mobile version