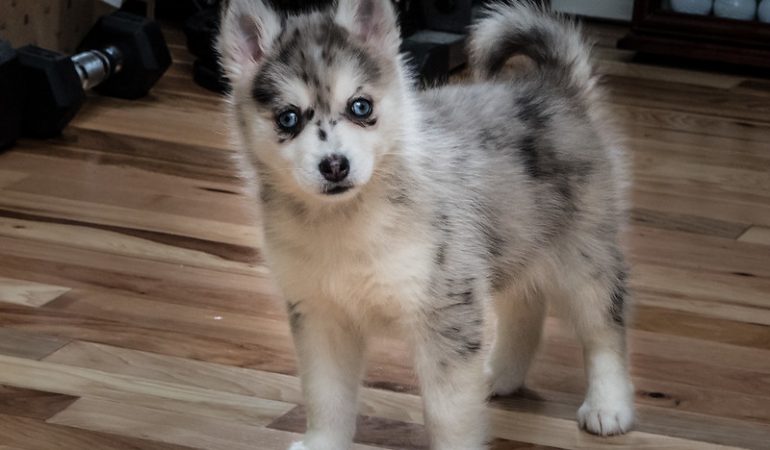 Part fluff nugget, part Wolf, the Pomsky dog breed is known for its furry cuteness and cheerful personality. The only dog to become an internet sensation before it was even born. Such is the charisma of these four-legged furbabies that captivate hearts with their killer good looks and action-packed temperaments.

As we have been featuring the crossbred dogs on our blog, especially the Doodles, this time we have planned to feature a different breed, and the chosen breed is no other than Pomsky which is a cross between the Pomeranian and Siberian Husky.

This article contains a comprehensive guide about Pomskies and the topics covered are the history of Pomskies, an introduction to the parent breeds, health-related issues, pros and cons, grooming, maintenance, temperament, and everything else which you need to know before getting a new breed. Read Best Pomsky Breeders.

So, let’s start with the history of this hybrid breed.

Pomsky is a relatively new breed of hybrid designer dog that is not much old as compared to some other designer breeds. The Poms first came into existence in 2012 through artificial insemination. However, the idea of this clever crossbreed came in 2011 when a BuzzFeed article, titled, “Pomskies – The Pomeranian + Siberian Husky Mix: the cutest designer dog breed ever?” went viral on the internet. While the actual article had featured images of a Finnish Lapphund puppy, the idea of what a Pomsky would potentially look like gave the entire internet a cuteness rush.

People gushed over the idea of a Pomeranian + Siberian Husky cross and could not wait to get their hands on one, seeing which dog breeders picked up pace as well. So, that is how the first Pomsky was born.

The dream turned into reality by two Arizonian friends Joline Phillips and Tressa Peterson in 2012 when they crossbred Dam, the Siberian Husky, and Sire, the Pomeranian to produce the very first litter of cute and adorable Pomskies.

As soon as the Pomskies came into being, they instantly became hotcakes and many breeders started breeding them. Currently, Pomsky is among the most popular hybrid or designer dog breeds in the US and many other countries.

The Pomsky is the silliest and cutest of all dogs having a heart of gold. This is why it is so loved and sought after by dog owners around the world. Here are some of the most distinctive features of a Pomsky that are guaranteed to melt anyone’s heart.

Introduction to the Parent Breeds 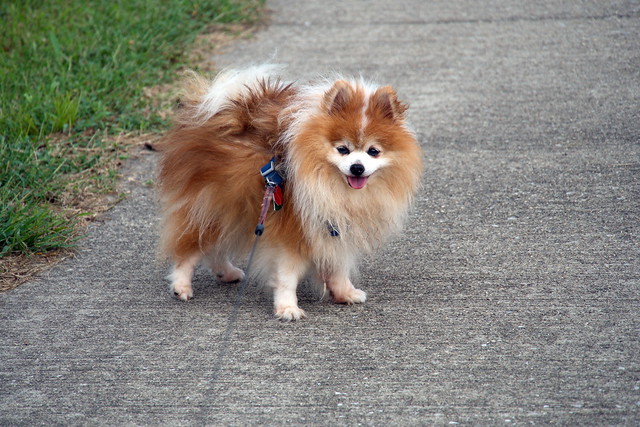 Pomeranian is a small-sized Spitz-type dog from the Pomerania region (split between Poland and Germany). It is an affectionate, friendly, and intelligent dog that loves to bark and has a very high pitch. Pomeranians remain a popular breed for a long time, in fact, Queen Victoria of England owned several Pomeranian dogs in the 1800s. Another interesting fact about the Pomeranians is that two Pomeranian dogs survived the sinking Titanic in 1912.

The Pom-pom dog is an ideal family dog and does well with kids, elders, and other pets. It can easily adapt to apartment life and due to its high-pitched voice and suspicious nature, it may become an ideal guard dog.

A Pomsky would more likely inherit the Pomeranian’s friendliness, size, and protective personality. 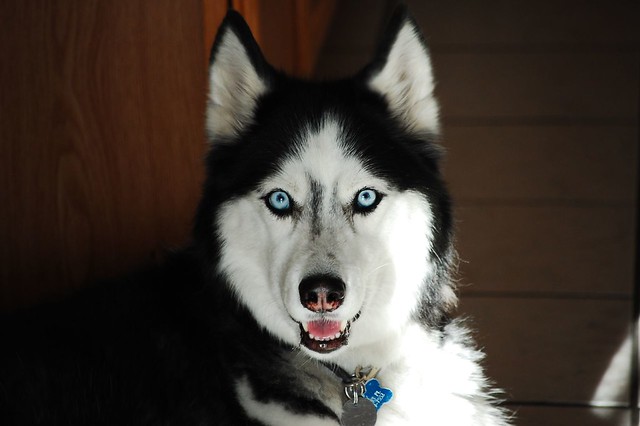 The Siberian Husky is a friendly and affectionate dog that is highly proud and dominant by nature, but with early-age socialization and training, you can transform them into the ideal family dog. Other than its dominating nature, it is a kid and pet-friendly breed.

They originated in Northeast Asia and were originally used as sled dogs. They were brought to the US in the 20th century and are the 12th-most popular dog breed in the US at the moment.

The Siberian Husky is a high-energy dog that has high exercise and activity needs. Being double-coated dogs, they are not an ideal breed for warm areas. Their grooming needs are also high and require grooming more often.

If you are obsessed with the Siberian Husky’s cool looks but do not have enough space for it at your home, a Pomsky would be an ideal choice for you then. Pomsky inherits Husky’s friendliness, intelligence, and fluffy coat.

Like all the other dog breeds, they do have several positive and negative traits that you should learn before getting a Pomsky puppy. So, have a quick look at their pros and cons below.

A Pomsky is like a box of chocolates; you never know what you are going to get. A Pomsk’s personality and attitude rely significantly on its genetic makeup. For the most part, the Pomsky is a ferocious little troublemaker bursting with the energy to play around and socialize. But we warn you not to be deceived by their small size and cute looks, for they are extremely loud dogs that both howl and bark to get their way with their human.

At the same time, Pomsk is also a naturally curious dog with playful antics that it loves to use to get attention and love but who can deny that, especially, when it is this adorable? The Pomsky is an extremely loyal and faithful pup that makes an excellent guard dog, helpful around children as well. So, don’t be afraid of adopting one on account of occasional stubborn behavior.

Living with a Pomsky

Pomsky’s small size makes it a suitable dog for both apartments and larger homes. It is essential to train a Pomsky from an early age; otherwise, it becomes stubborn and chews away everything in its path. However, early socialization ensures that your Pomsky remains well-mannered and well-behaved without losing its natural perkiness.

Like most hybrids, Pomskies can develop several health complications. They are genetically prone to several allergies, eye problems, and even heart diseases. So, be sure to take extra good care of your puppies and schedule monthly vet appointments to be on the safe side.

If not bred well, the Pomskies may inherit the following diseases from their parent breeds. So, before getting a puppy from a breeder, make sure to ask for the health certificates of the parents. And ask the breeder to let you meet with both parents.

Apart from the fact that Pomeranian is a healthy breed, it is prone to the following diseases and a Pomsky may inherit anyone of them.

Given below are some of the common diseases a Siberian Husky may get, likewise, the Pomsky may also inherit them from Huskies.

Pomskies are very energetic creatures that require walking at least once a day, provided the owners also play with them frequently. They like being challenged and love outdoor exploration due to their intelligent nature. So next time you plan a trip, be sure to pack your Pomskies.

If you are wondering what Pomskies eat, look no further, for we have it all here. Ideally, Pomskies should be given a high-quality variety of dry kibble that can supplement all their dietary needs and keep them healthy and happy.

Pomskies are estimated to have a life span of 10 to 12 years, but since the breed is relatively new, these numbers are likely to change shortly with better breeding practices and healthcare facilities.

On average, a Pomsky litter may have around 5-6 puppies but you can never predict. Also, it is usually observed that most of the puppies in the same litter are different from each other.

There are several factors that are considered while finalizing the price of a Pomsky puppy such as color patterns on the coat, eye colors, quality, and size of the puppy. If getting from a reputable breeder, it may cost you between $1500 and $5000.

How big is a full-grown Pomsky?

Usually, a full-grown Pomsky would stand somewhere between 13 to 18 inches while it may weigh between 20 to 30 pounds. It will take 18 months for a Pomsky to be grown fully in terms of mental maturity, adulthood, sexuality, and physical appearance. Read Facts You Need to Know About Full-Grown Pomsky

Do Pomsky dogs bark a lot?

Well, barking and howling in their genes and they inherit it from the Huskies but training and socialization at the right age can control it.

Is it easy to potty-train Pomsky?

As compared to other breeds, it is a little difficult to potty-train Pomsky dogs but if you set and follow a routine patiently, you won’t be facing a tough time.

How often should I bathe a Pomsky?

You should bathe your Pomsky every 1-3 months. In summer, you may bathe them once a month while in winter, after every 3 months.

Yes, they are highly intelligent, and they pick commands quickly but being a product of Husky and Pomeranian, they may inherit stubbornness and dominance that can be figured out using reward-based training sessions.

No, they are among the high-shedding breeds and shed a lot. So, they are not an ideal breed for those who are allergic to dog hair and fur.

Pomsky puppies are simply adorable, and it’s hard to resist their charm. But it is not wise to adopt a pup purely based on looks. Dogs are a huge responsibility, and for first-time dog owners, it is not the best idea to adopt a Pomsky if they cannot look after its complicated grooming and training needs. So our advice to first-time dog owners would be to look for a low-maintenance breed.

You may like reading: Things not to do while Grooming your Dog 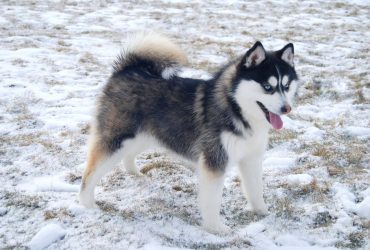 Pomsky, the fluffy wolf-like dog, is one of the most popular crossbreeds in the US …
More 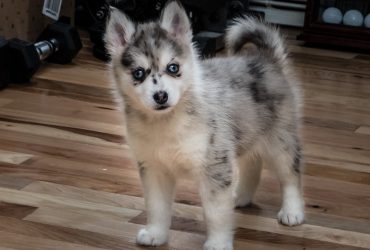 Pomsky, a cross between the proud Siberian Husky and the loud Pomeranian, is one of …
More 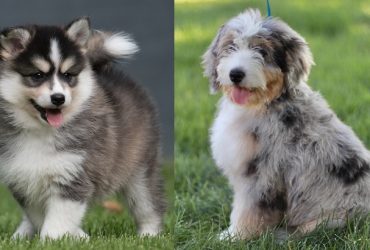 Bernedoodle and Pomsky, both are among the best hybrid breeds and are in high demand …
More