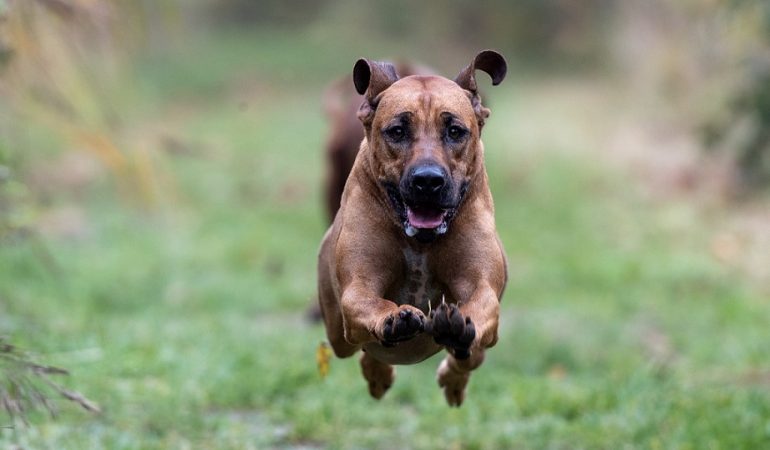 Rhodesian Ridgebacks, taking its namesake from its country of origin (Rhodesia now Zimbabwe) and the hallmark ridge, are the most loyal and playful companions. The glorious sight of a resting doggo by the chair or sharing a play outside with Rhodesian would make anyone’s heart melt. Apart from the fact that it is an African dog breed, it is among the top 50 dog breeds in the US.

If you are looking to get a Rhodesian Ridgeback puppy and want to know more about the breed traits, facts, figures, health-related issues, and others, you are in the right place. This comprehensive guide covers almost everything you need to know about Ridgeback and after reading this article, you could easily decide whether to get this dog or not.

Since how long Rhodesian Ridgeback exists?

Sometimes known as the African Lion Hound, the Rhodesian ridgeback traces its origin back to the 18th century. It was developed when the first European settlers in Africa wanted an all-rounder and excellent family protector hounds as their companions. The exact lineage is not known, but it is commonly believed that Ridgebacks are a crossbreed between the native Khoikhoi hunting dogs and European dogs.

This shorthaired dog with a distinctive ridge was bred by Boer farmers to withstand the wilds of Africa. Rhodesian Ridgeback takes its name from its homeland now known as Zimbabwe and the distinctive ridge that runs down his spine.

In 1922, a group of breeders in Zimbabwe set up a standard for the Rhodesian Lion dog. In 1927, the name of the breed got approved by the South African Kennel Union. Eventually, the American Kennel Club also recognized this versatile breed as members of the hound group.

What are the best features of this breed?

Ridgebacks are strong, athletic, and uplifted creatures with high endurance and speed. Here are some of the features of the agile canine clan which sets them apart from other hounds.

Shorthaired easy-care lively packages that are packed with a sense of humor, smartness, confidence, and dignified temperament. Ridgebacks are an extremely intelligent breed, but this virtue comes with a highly stubborn nature. Although they make calm and devoted companions, these two defining attributes may come off as a challenge for owners.

Ridgebacks are strong-willed, territorial creatures and might not be thrilled to see strangers; human and canine. Even though they seem to be fond of lazing around on the sofas all day, their presence can sometimes be threatening and should always be supervised.

Living with the Ridgeback:

If you love the sight of a large furry pup lazing around the house with mischief in its eyes, then Ridgy is just the right pet for you. Rhodesians are outgoing dogs and can adapt to apartment life. However, a home with a high fence is recommended because when curiosity takes over, a small underground fence will not keep them from climbing over.

They need very little grooming as they are extremely clean, with little odor and minimal shedding.

These fur-balls were bred as independent thinkers and so are not pushovers to train or raise. In fact, they are tolerant and easy to train when in the right hands.

They need assertive and consistent owners to deal with their dominant and bossy nature. They are willful creatures but sensitive enough to wilt at the first sign of disapproval. Training must be undertaken with consistency and a touch of delicacy. Otherwise, your pup’s spirits will be crushed and he will turn into havoc.

Rhodesian Ridgeback dogs were formerly known as lions and were bred to hunt. Hence, they need early socialization to curb their prey drive. They do not make good pets for very young children due to their sheer size and predator nature.

Extensive exposure to different people, pets, sounds, and sights from an early age would ensure that your pup grows up to be a well-mannered hound.

Rhodesian thrives on vigorous exercise and athletic activities. It needs regular mental and physical exercise opportunities to channel out the high energy-levels; otherwise, it becomes rambunctious and chews away everything in its sight.

Rhodesian Ridgebacks, despite being resilient and generally healthy, are prone to a few genetic and developmental problems. The most common of these problems are mentioned below.

Dermoid Sinus: They are prone to this disease unique to its own breed only. It causes when the embryonic spinal cord fails to fully separate from the skin and results in painful lumps along the dog’s ridge.

Elbow and Hip Dysplasia: As with many large dog breeds, they can also suffer from these inherited conditions. They may cause mobility problems which can be aggravated by a high-calorie diet or injuries caused by jumping around furniture.

Due to these health concerns, the approximate lifespan of a Ridgy is 10-12 years.

All in all, Rhodesian Ridgebacks are splendid, high-spirited, and devoted companions. Like all dogs, they will do best with fair, friendly, firm, and consistent training techniques. These huge but cute creatures with almond-like eyes and boisterous nature will surely lighten up your days.

So, If you think you can cope up with these lovely but demanding creatures then adopt a Rhodesian pup today.

You may like reading: Shih Poo | Groodle | Pomsky | Bernedoodle