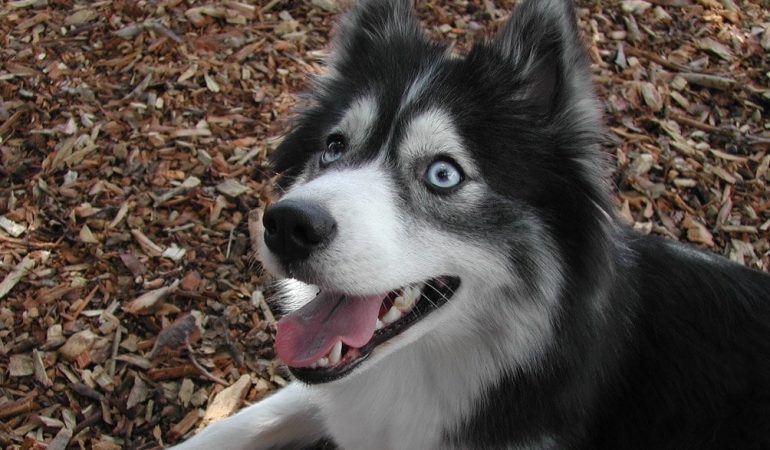 When you cross the beautiful Siberian Husky with the loyal American Eskimo, you get a Huskimo — a loving and playful breed that has a ton of energy.

Huskimos are family-oriented, intelligent, and playful dogs. They are great companions and are very social, which means they make great pets. Moreover, they are obedient, expressive, and full of energy.

If you are looking to get a Huskimo puppy and want to know more about this friendly breed, keep reading for a complete guide on Huskimos.

But let’s read out the quick breed profile first.

Huskimos are said to be bred for the first time in the early 1990s. Breeders and experts usually cross-breed different breeds for the sake of popular traits, similarly, the Siberian Husky and American Eskimo dog were combined to develop such a dog that has traits of both breeds. So, to better understand this breed, we have to know the parent breeds better. Why parent breeds? Because Huskimos are among the most recent dog breeds and their facts and figures may vary.

So, let’s have a quick look at the parent breeds.

Quick Introduction to the Parent Breeds:

The Siberian Huskies were used as a watchdog and sledding because they could handle the extreme cold weather. These dogs originated in the harsh climate of Chukchi, a tribe in Siberia. They were later brought to Alaska, and people used them for fur trading.

Today they are known for their playful and affectionate personality. Huskimo is devoted to his owners but requires regular exercise and lots of training. As of 2020, the Siberian Husky was the 16th most popular dog breed in the US.

They hail from Germany and were popular as German Spitz, but the Americans renamed them to American Eskimo during the first world war in 1917. They are famous for their white fur, black eyes, high-shedding coat, and loud barks.

They are a Nordic breed from the family of Spitz dogs. In the 19th Century, Germans brought them to America.  People developed them initially as farm dogs but now they are among the popular indoor dogs.

American Eskimo is admired for his personality and beautiful looks. It is outgoing, smart, and friendly. They are ranked 119th out of 195 dogs recognized by AKC. Some other popular American Eskimo crosses are American Eagle dog (Beagle cross), Chimo (Chihuahua cross), and Pomimo (Pomeranian cross).

Read: Bernedoodle Dog Breed Info | Read Before You Get

Huskimos are a hybrid breed so they have variations as they carry genes from both parents. Given below are a few features of Huskimos.

The Huskimo dogs are smart, energetic, and devoted. They love their owner’s companionship and attention. Getting sufficient exercise and physical activity is necessary for them in order to stay healthy physically and mentally. They are more likely to misbehave if they are left alone for a long time than usual.

Huskimos are good family dogs as they get along with children very well. They are intelligent and playful but need a lot of attention from their human family.

They are not a good watchdog as they can easily be melt if someone offers friendship to them. They should be well-fed, but you should avoid overfeeding as they are prone to obesity. They can adjust easily in cold weather because of their thick coat. However, it would be best to oversee them in hot weather as they may suffer from heatstroke in such conditions.

The long thick coat looks beautiful, but it requires a bit of care. They shed a lot, so the fur needs to be brushed two to three times a week. Along with that, they shed twice a year heavily, so you should be prepared for that.

Their teeth should be brushed twice a week to keep their gums healthy. They should be given a bath every few months, and their ears should also be cleaned to prevent any infection and to make sure there is no foreign substance in their ears. It would be best if you trim their nails once every month.

Training is essential for every dog, no matter the breed, and Huskimos are no exception. They are extremely intelligent but training them requires some patience. Huskimos are enthusiastic dogs, but they must get physical exercise. The owners should dedicate a specific time per day for them. They have strong pack nature, so the owner should play the role of pack leader while training them.

Try to have shorter training sessions and make them fun. Don’t be harsh during the training because they develop aggressive behavior due to harshness. As long as you are dedicated and dominant, they will listen to you. The use of praise and rewards proves to be effective in training dogs.

As they are social, they get along with other pets very well if they are well trained. But it’s not the case with every Huskimo. Due to their hybrid nature, if the husky character is dominant, they may not socialize with other pets and consider them prey and chase them.

They are well-behaved and fluffy that makes them perfect cuddle buddies. If you live in an apartment, then Huskimo is not for you as they are too big and active for apartment life. A home with a lawn or a backyard would be an ideal place for a Huskimo dog.

As they are a designer dog breed, they are likely to have genetic health problems if not bred by an expert breeder. So, if you get a Huskimo puppy from a well-known breeder and not a puppy mill or backyard breeder, there is a chance of fewer health issues. However, the primary health concerns of a Huskimo are hip dysplasia, eye cataracts, obesity, and skin infections.

As a responsible owner, you should feed your Huskimo a healthy and balanced diet, and focus on their physical exercise to keep their weight in a healthy range. It would be best to visit the vet twice a year to avoid any serious health issues and viral infections.

Cost of owning a Huskimo

Their cost varies from breeder to breeder and state to state. Normally, a huskimo puppy may cost you up to $2000 while other expenses such as vet visits, vaccinations, dog supplies, grooming, and food may cost you between $1500 to $2000.

Huskimos is not the right pet for everyone, but they have a lot to offer to you if you are a loving owner. They adapt very quickly to the changing weather conditions. Their intelligence and lovingness make them good playmates. However, their grooming and training require patience, but it’s worth the hustle.

Why Shouldn’t You Get a Dog from a Backyard Breeder
How to Improve Dog Gut Health?
5 Ways To Keep Your Dog Healthy and Happy